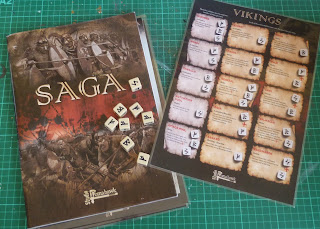 I have been very interested in everything I have read and heard (on Meeples and Miniatures) about Gripping Beast’s new Saga rules. I ordered a set of the rules, dice and starter warbands for the Vikings and Welsh, which arrived a few weeks back. Since then I have had a good look over the rules, played a few games and got stuck into painting up warbands.

This is a review of sorts based on my experience so far. To start with, let me say that I like this game a lot. I’ve usually not been attracted by skirmish games, although I like the look of the Song of… series from Ganesha Games. However, if any skirmish game was going to get me in it would be set in the Viking age. I have always loved reading the Norse sagas, and there is something about the larger than life figures we find in the sagas that lend themselves well to games that emphasise the actions of heroic individuals. For some reason Harald Hardrada at Stamford Bridge stirs my blood more than Tiberius Gracchus going over the wall at Carthage, for instance.

So how does Saga work? There are a few excellent reviews already on the web, but for what it’s worth here is my brief summary.
Saga pits the warband of one (or more) warlord against another. So far the game encompasses four rival ‘factions’ of the 11th century – Vikings, Anglo-Danish, Welsh and Normans. Rules for more ‘factions’ are on their way, and we can expect Scots and middle Anglo-Saxons (c. 9th century?) to be added before Christmas. When mustering a warband the game uses a simple points system. A group of 4 hearthguard, 8 warriors or 12 levies cost one point each, and the warlord is free. The game is really intended for 6-point warbands, although they recommend starting with 4 points. On the tabletop, these groups can be organized into different units, so long as no unit contains fewer than four figures or more than 12, and so long as each unit consists of only one type of figure (so a unit cannot contain warriors and levy, for example).

And a Viking Warband under construction, led by Harald the Half-Painted.

Some things I like about this system is that it is dead simple and that it only differentiates between the forces of different ‘factions’ in a few small ways in order to draw out different ‘national’ characteristics. For example, Anglo-Danish hearthguard are equivalent to their Viking counterparts in all respects except that one unit of Vikings can be berserkers, and Anglo-Danes can be armed with Danish axes. Welsh hearthguard have slightly less armour protection but carry javelins, and so on.

The mechanics of movement and combat are very straightforward. All foot figures can move a set distance unless they are mounted (in which case they move further) or unless they touch rough terrain or an obstacle (in which case they move less!) Melee and shooting is resolved by a simple system of rolling a number of dice (D6s) depending on the type of figures engaged and scoring hits when the number rolled is equal to or greater than the enemy’s armour (eg 5 for hearthguard, 4 for warriors). Your opponent then has a saving throw for each hit with 5-6 cancelling a hit scored in melee, 4-6 cancelling a hit by a missile.
Sounds pretty dull so far, doesn’t it? The real meat of the game are the Battle Boards. At the start of each turn the player rolls a set of special Saga dice (see below) and chooses how to allocate them to their Board to be able to activate their units or to activate special combat modifiers or other abilities. Clearly a lot of playtesting and thought has gone into devising abilities on the Battle Boards that try to capture some of the essential differences between, say, Viking and Welsh warfare. For example, the ‘Saga Abilities’ on the Welsh Battle Board emphasise rapid movement and use of rough terrain, whereas the Viking Saga abilities encourage aggressive closing to melee as rapidly as possible. As just one example of a specific ability, the Welsh Board includes a ‘Taunting’ ability. This allows the Welsh player to target an enemy unit (in the enemy’s turn) and force it to charge a Welsh unit of the Welsh player’s choice. Clever game play can use an ability like this to draw an enemy unit out of a strong position and force it to fight on disadvantageous terrain. 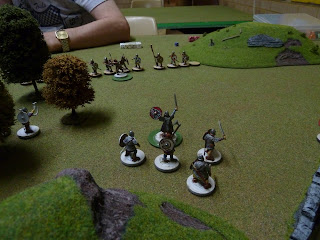 The Battle Boards create a highly interactive game that reminds me at times of a game like Magic The Gathering. Having dice on Saga Abilities on your Battle Board is a bit like holding Instants in your hand in a game of Magic. You can play them during your opponent’s turn to upset their strategy. The other very interactive aspect is how the game handles fatigue. Although units can be activated as many times as the Saga Dice allow in a turn, this comes at the cost of accruing fatigue. In a nice game mechanic, the fatigue of a unit can be ‘spent’ by their opponent to decrease their effectiveness in combat, or the player can try to increase an enemy unit’s fatigue in order to exhaust it, thus in many cases providing opportunities to use specific Saga abilities.

Anyway, this might give you a bit of a feel for the game. I love it, and one of the things I love about it is that it will prove very successful in getting people into historical wargaming. In the club I run at school it has gained an instant following, and there are currently about 8 boys (and a couple of other teachers!) busily painting up their warbands. The small number of figures involved make this an accessible game to get into, and particularly when boys come from a background of playing games like Magic or that unaccountably popular game with hammer in the title, the mechanics are easy to pick up. I really must thank Ian from War and Peace Games for his support for the school club, and for his enthusiasm in seeing kids get involved in the hobby. Buy stuff from him - he's a brilliant bloke.

The rulebook also contains some extra bits and pieces – some good scenarios and rules for named heroes as warlords for example. The game is also supported by a good forum, where we can expect to see new scenarios and faction rules developed enthusiastically in the weeks and months to come. A PDF of the Saga Dice symbols is also available for free on the forum, so don't be put off by the cost of the dice - make your own. To be honest, I played a game last Friday just using D6s instead of Saga dice, and there was no problem. See the dice as attractive and adding flavour to the game, but they aren't necessary.

Suffice it to say that I am hooked, and busy painting. This is a really clever little game that is, most importantly, damn good fun.

Posted by Dux Homunculorum at 2:57 AM 11 comments:

On Saturday I got to spend the day at MOAB, the annual wargames convention put on by the Southern Battle Gamers in Sylvania, Sydney. Despite my long standing hobby interests this was the first time I've ever been to a convention, and I had a blast. I picked up a Langton Danish frigate, a box of Gripping Beast Vikings and some bases, but the highlight was definitely the DBA competition. I played 5 games and won 2, which I was very pleased with, having never taken part in a competition before. A big thank you is due to Stephen Webb for organising the event and supplying terrain etc. I'm only sorry I couldn't hang around for the Sunday DBA campaign set in 1067. Most importantly, the homunculi were quite pleased with me, as I failed to have them massacred in my customary style. The dice blessing obviously did the trick.
Posted by Dux Homunculorum at 6:28 PM 2 comments: