The Scots warband steadily grows - here are the next 9 warrior figures.

Why Nerf in the title? Well, I live in one of those vile strata unit complexes. You know, the sort of place with manicured lawns that nobody is ever supposed to use, populated mainly by affluent loathsome retired people who have discovered that retirement offers them nothing except the opportunity to check what all their neighbours are doing all the time. One of those places that uses the word 'community' a lot, but only as a way of telling you that you shouldn't be doing whatever it was you were thinking of doing. Having young children, we of course tend to attract all kinds of unwanted scrutiny. Just this afternoon the Duchess was told off by some misbegotten troll because the two year old junior Dux was playing with a blind in the communal hallway. I can't wait to move out. Anyway, there are some people we quite like in the complex, mainly because the mini Duchess has met another mini Duchess. Yesterday her friend's brother was trying out his new awesome Nerf gun (where were they when I was 10!??) I went and got my much less awesome Nerf gun to show him, and suddenly about 5 other kids and dads emerged from various buildings tooled up with Nerf. It was hilarious - I met more people from the 'community apartments' yesterday than I have in the previous three years, because they were all packing Nerfs. The funniest thing was seeing several middle aged blokes (including me) desperately keen to let rip with all the Nerf hardware but trying to restrain themselves while their kids ran around blasting each other. It is amazing how simulated violence can bring people together.
Posted by Dux Homunculorum at 3:28 AM 9 comments:

As you may have seen already on the blog, I've been fiddling around with a Late Roman version of Saga, set in Gaul in the fourth-fifth centuries AD. I've done a bit of playtesting of the battle boards that you'll find elsewhere on the blog, and will shortly fix up a version 2.0, but today I finished a unit of 8 spear armed warriors to complete a late Roman 'warband'. In Saga terms this is actually 5 points worth, but I'll add another point of barbarian foederati at some point. All the figures apart from the 'Warlord' are from Black Tree Design, and very nice they are too. The Warlord is from Westwind Productions. Here he is, looking suitably like a Frankish warrior in Roman service. 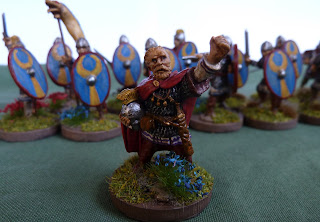 According to my Late Roman rules for Saga, Warriors (which I call comitatenses) can be armed with bows, as here: 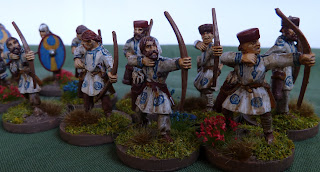 ...or with spear and shield. According to the Notitia Dignitatum, a late Roman administrative document that includes, amongst other things, the shield designs for different military units, these men carry the shields of the Romanenses. This was a 'pseudocomitatenses' unit, which probably meant they were frontier troops taken into the field army. 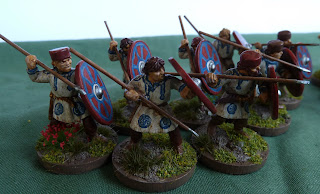 And here are the palatini (hearthguard) from the unit listed in the Notitia Dignitatum as the Bracchiati Seniores.

I'm looking forward to doing some more playtesting using these chaps. I bought enough Huns to make a warband from Colonel Bill's Wargames Depot. Colonel Bill's is a real find - they sell second hand and unused figures. My Huns are from Wargames Foundry, but at a price that makes buying them actually a realistic prospect. But before painting the Huns, the next task is to finish my Scots warband. 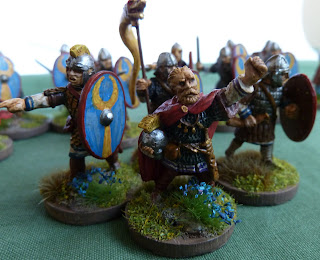 Posted by Dux Homunculorum at 5:31 AM 6 comments:

This week I have been mostly...painting my first two points worth of my Scots warband for Saga. Here they are - 8 figures of hearthguard, all from Gripping Beast. Lovely figures to paint. 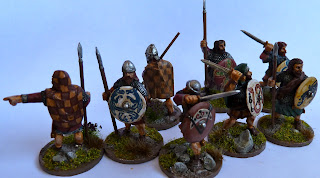 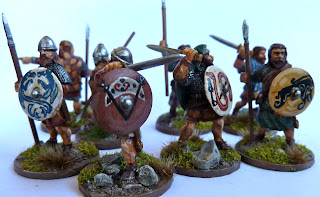 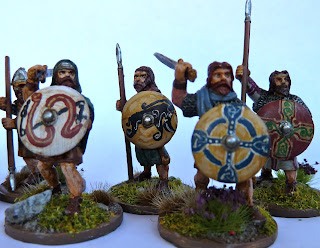 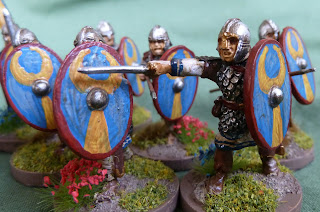 Black Tree Design have obviously annoyed a lot of people in the past with very poor customer service, judging by some vitriolic threads on the likes of TMP. However, I took the risk of ordering some of their lovely late Roman figures recently during a 25% off sale, and I'm pleased to say that they all arrived safely and in a reasonable time, although bizarrely some came from the US and some from the UK. 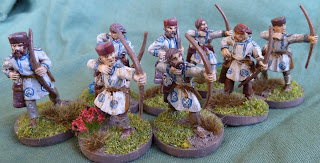 These figures are painted up to playtest the late Roman modification for Saga I've been working on. In Saga terms, the heavy infantry are three points of what I call palatini (hearthguards in Saga), and the 8 bow-armed warriors are called comitatenses. The shield design for the palatini show they belong to the Bracchiati Seniores. The figures painted up really well, and I particularly like the detail and character in the faces. Highly recommended, so long as Black Tree stay on top of their customer service and delivery. 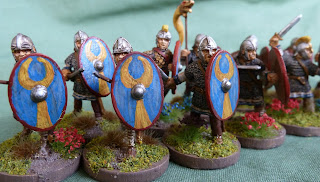 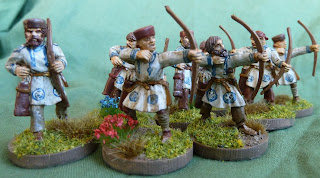 Matt from The Hall of Heroes kindly sent me a photo of the happy prize winners from the weekend Saga competition. Here we are: 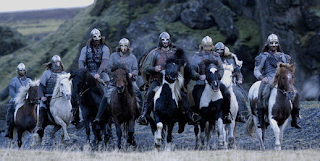 Oh, alright, not really. This is the harsh reality: 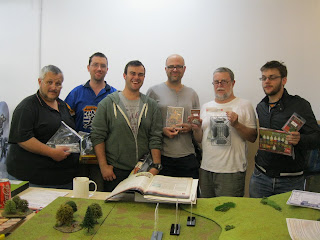 Note the great prizes from War and Peace Games. I'm the one with the most reflective head.
Posted by Dux Homunculorum at 3:05 AM 7 comments: