I've finished the next 10 figures for my new SAGA warband - the Pagan Rus, a great new faction that were announced earlier this week and will be released at Salute. 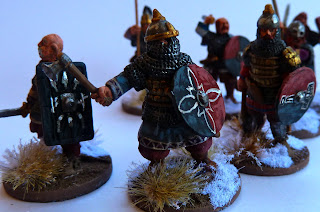 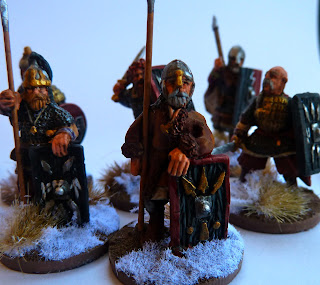 Meanwhile, I've also finished my first 6mm figures for Phil's present. I finished off thee triarii with a coat of my ersatz army painter dip and a spray of matt varnish, and I'm pretty happy with the results.

Oh, and if you don't already know about this, head on over and visit Ian at The Blog With No Name. He has some fantastic giveaways on at present. Good luck!
Posted by Dux Homunculorum at 2:31 AM 5 comments:

6mm Triarii Progress, and Thanks Rev!

I've been chipping away at some of the 6mm Romans for Phil and hoping to make a major push on them over Easter. Here's the WIP on the triarii.

After washing with raw umber of over a white undercoat I painted them in the order of mail shirts - back of shields - spears - front of shields - flesh - helmets - plumes. With the camera zoom I can see dodgy paintwork I honestly can't detect asily while looking at the actual figures. All the colours are quite pale, and I'm thinking of giving them a wash with some diluted stain varnish to define some of the detail a little more.

I must say that I'm impressed by the detail, and by how easy it is really to whack some paint on them. I think they'll look ok. I don't want to be the subject of one of Phil's epic rants!

In other news, the figure I was kindly awarded by the Mad Padre, Mrs Padre and Stanley the Cat arrived safely, and it is a cracker. Thanks Rev! 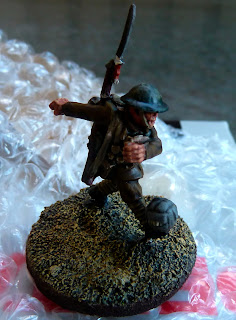 The Start of Something Small

As avid followers of this humble blog may recall, Phil Broeders was the (perhaps) lucky winner of some painted figures of his choice from my 250,000 hits giveaway. Phil went and chose 6mm Republican Romans, so after a deep breath I girded my loins and ordered some figures from Baccus. This is my first time painting 6mm, and I think the experience will either send me insane or make me hooked onto a new scale. Let's find out which.

So, step one. In my giveaway I offered to paint around 10 figures. The equivalent cost buys quite a few little Baccus figures. Phil will be getting several units of hastati/principes, some triarii, velites and even some generals, one of which will of course represent me on the tables of Phil's future battles. Here they all are, undercoated in white. 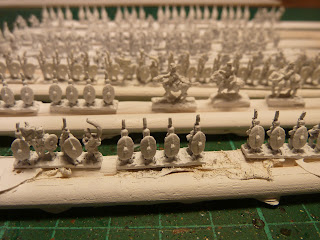 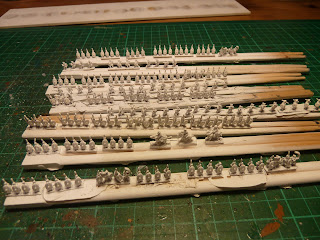 I decided to undercoat in white because I wanted to try out washing them with a coat of diluted raw umber. The plan is that this will define the detail for painting, but also essentially shade the tunics for those I intend to leave white. The other alternative is of course a black undercoat, but to my mind this usually leaves the figures looking a bit too cartoony.

Here's how they look after a wash of diluted Windsor & Newton raw umber. New small paint brushes are purchased, so let's get underway... 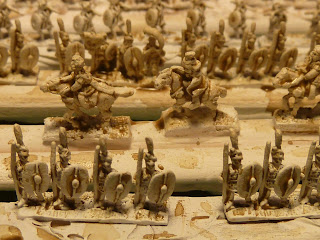 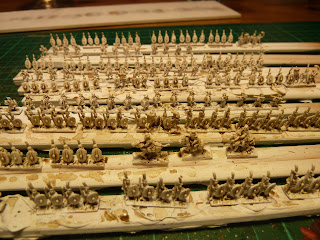 Posted by Dux Homunculorum at 2:12 AM 13 comments:

Had a pleasant visit to the dentist today that involved him discovering that one of my teeth was mostly cavity and that a wisdom tooth had to be extracted as well. Currently feel like I've been kicked in the face by a horse who also managed to steal my wallet while he was at it, and I'm not supposed to drink ridiculously strong beer to dull the pain for another 18.5 hours.

While I'm feeling sorry for myself, here are some pics of my latest painted figures, completed while I'm waiting for Phil's 6mm prize figures to arrive from Baccus. Paul of the Man Cave gave me a pot of GW snow a while back, so I thought I'd paint up some Eastern Vikings/Jomsvikings with a winter theme, rather than my usual summery bases with flowers. I've gone for dark clothing colours to maximise the contrast with the snow on the bases. 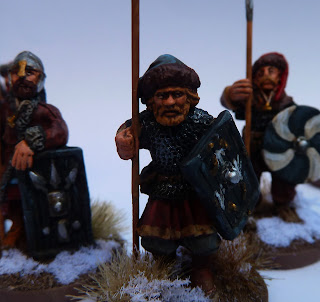 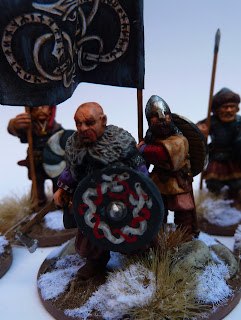 Posted by Dux Homunculorum at 1:40 AM 9 comments:

Crazy busy week! I managed to get up to the post office during a free period to post off the prizes for the Mad Padre and Scotty, and I've ordered the figures I'll be painting for Phil Broeders. I'm going to be doing up some 6mm Republican Romans from Baccus. This is a bit daunting - I've never painted anything so small before - but I'm looking forward to the challenge. Most likely I'll get hooked and start painting 6mm armies for myself. Lasalle with 6mm....? Hmmm.

In other news, I won a prize myself! The Mad Padre ran a great comp that involved writing a poem, and Mrs Padre picked mine as the winner. I'm so chuffed, and looking forward to being the proud owner of this lovely mini: 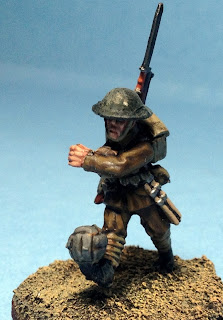 As the Padre pointed out, Mrs Padre didn't know that he had won one of my prizes, so he denies any corruption. What he doesn't know is that I struck a deal with his cat Stanley (who featured in the prize draw). Like all felines, Stanley was more than happy to engage in corrupt practices. The only question know is how to get the small rodents I promised him to Canada...
Posted by Dux Homunculorum at 11:15 PM 5 comments:

After lunch at school today I had a lesson off, so I enlisted the help of my friend and colleague Antonius to draw the winners of my 200K competition. You may recall we last met Antonius when he and I ran into some zombies crossing Hyde Park. After a little persuasion he embraced his duties with the even-handedness of the truly indifferent.

First to be drawn was Prize 3 (a copy of 'Disposable Heroes' from Iron Ivan Games). There were 8 entrants, drawn from my stylish fedora. 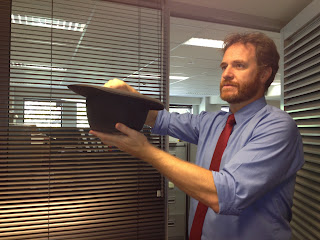 And the winner is... 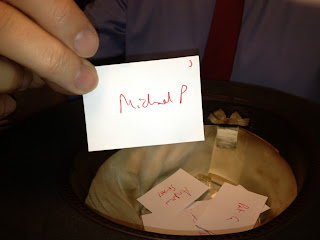 Prize 2 (the Eureka figures for Lasalle) had 9 entries, the winner being drawn from some sort of pith helmet which belongs to another colleague. 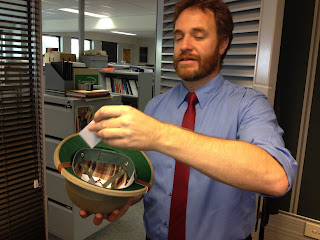 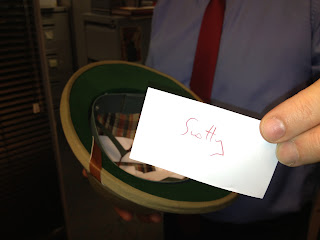 Congratulations to Scotty! You have some painting to do.

Finally, the big one. Prize 1, in which I have some painting to do. 27 entries in this one, drawn from my Cadet Corps slouch hat. 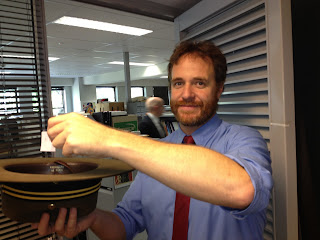 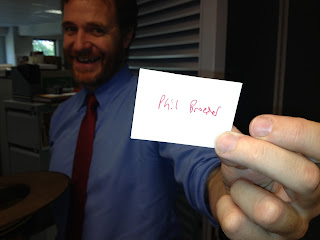 Congratulations to the three winners, and commiserations to those who missed out. If the prizewinners would like to send me an email I'll sort out getting the prizes to you. You can email me at: alan_dearn(at)hotmail.com
Posted by Dux Homunculorum at 3:21 AM 21 comments:

Phew! Finally finished painting the three boxes of Fireforge Knights that I prepped just after Christmas. Here's the last batch of 12. I still have to do their banners and gonfanons, but I need a breather from the 13th Century. 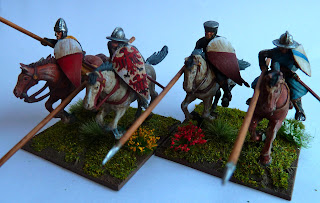 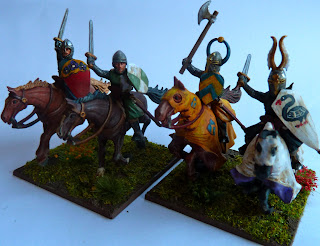 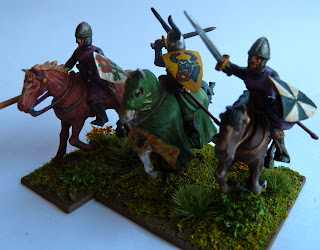 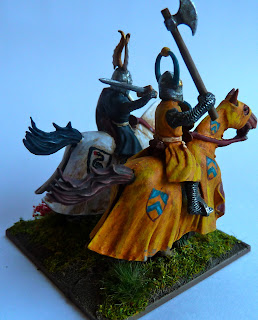 The bishop on the right is the only figure not from Fireforge. I think he's from Gripping Beast? In any case, I've done him up as the Archbishop of Trier. 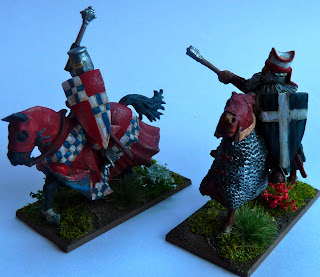 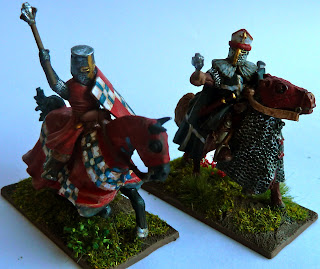 Well there we are. Don't forget my prize giveaway. Entries close Friday.

Having passed the significant milestone of 200,000 page views, it's time to return some love to all you fine people who visit my blog.

So, I have three prizes up for grabs.

PRIZE 1:
I'll paint something for you. I'm open to negotiation on this, but you might like something such as a SAGA warlord based up along with one of the Fenris Games Runestones I referred to here. Or maybe a unit of Swords for Hire for SAGA. Or maybe a small squad (up to 10 or so 28mm figures) of sci-fi, pulp figures, whatever really. Oh, and I'll supply the figures.

PRIZE 2:
A while back I made an impulse purchase of some 18mm Eureka/AB figures for Lasalle. I've since decided to stick with 1/72 figures when the Napoleonic bug bites again. So, prize 2 consists of 2 Lasalle packs of unpainted figures from Eureka Miniatures (codes LAS F-04 and LAS F-18). When based for Lasalle these will give you a battalion of French line infantry for the Hundred Days and a Regiment of Chasseurs a Cheval. For a detailed description of what's in each pack, see here. Lovely figures.

PRIZE 3:
A copy of the rulebook 'Disposable Heroes and Coffin for Seven Brothers', which you can read about here.

To enter, just post a comment saying which prize(s) you want to go in the draw for. You need to be a follower of the blog. Put in for all 3 if you want. Entries close at noon (Australian Eastern Standard Time), Friday 8 March, after which I'll draw the winners out of a stylish hat. 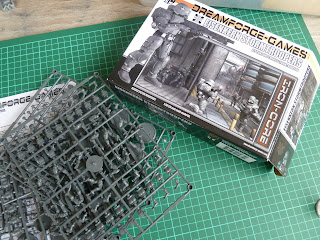 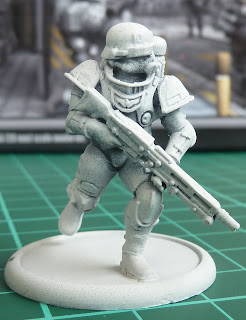 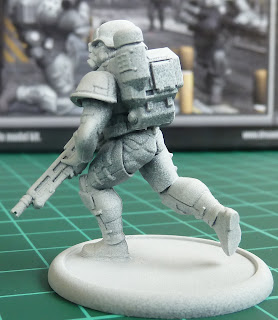 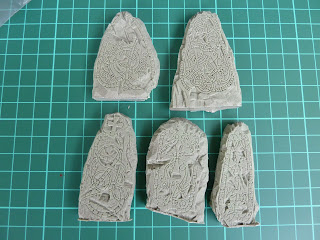 These are great little castings, and should look pretty impressive on a SAGA warlord's base or just in a terrain features. The customer service from Fenris was very good as well, with the pack on its way from the UK the day after I ordered it.
Posted by Dux Homunculorum at 6:59 PM 4 comments: