There were three types of flags used in the English Civil Wars: Ensigns, Cornets and Guidons. All were generically known as ‘colours’. Ensigns were used by foot, cornets by horse and guidons by dragoons.

You can find a great introduction to ECW flags here:

This gives the full introduction from The English Emblem Tradition Vol. 3: Emblematic Flag Devices of the English Civil Wars 1642-1660 by Alan R. Young, 1995. I own this book and it is great, giving a description and illustration (when known) of every known flag from the English Civil Wars that bears an emblem and slogan of some sort. This does mean however that most of the flags included are cavalry cornets. The book doesn’t include the more generic foot ensigns.

Ensigns were carried by each company of foot. They were usually about 2 metres square, so in 1/72 scale should measure about 2.8cm square. They were carried on short poles (around 2.3 metres long) to allow flourishing and twirling. In both Parliamentarian and Royalist armies the ensigns followed a similar design scheme. The ensign belonging to the Colonel was usually plain, the Lieutenant-Colonel’s ensign bore only the cross of St George in the top left corner. The ensigns of the Captains commanding each of the (usually 5) companies usually bore a number of heraldic devices or symbols, the number of which showed the seniority of the Captain. The more senior the Captain, the fewer devices.

This scheme is well illustrated on some free flags for the Earl of Essex’s army available on the Warflag site:

Some other free ensigns are available here:

Covenanter, Scots Royalist and Irish Confederate ensigns were a little different. Covenanter ensigns were usually, but by no means always, based on the St Andrew’s saltire, with some variation on the motto ‘Covenant for Religion, Crown and Kingdom’ or similar. In addition, the ensigns often included some heraldic emblem, often denoting the regiment’s colonel.

A few beautiful flags for Scots Royalists, Covenanters and Irish are available on the Project Auldearn blog:

If you want to buy ensigns for your ECW armies, the only option I am aware of in 1/72 scale is Rofur Flags:

Some are also available from Tiny Tin Troops, but I couldn’t work out what scale these are:

Cornets were much smaller than ensigns, measuring only 60cm square, which is about 0.8cm in 1/72 scale! I usually make them a lot bigger than this, going for the visual appeal over strict accuracy. Cornets were carried on lances between 2.44 metres and 2.74 metres in length. Unlike ensigns, cornets usually had a fringe, and bore a much greater variety of images and slogans. Many included outright propaganda messages. I’m not aware of any free cornets on the internet, or of anyone selling them in 1/72 scale. So I’ve decided to make some, and will put them up on this blog as they become available. Just resize them as you see fit on a colour printer. If anyone uses these I would love to see the finished product. Here are two for starters: 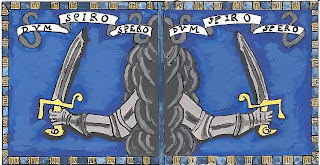 Parliamentarian Cornet belonging to Captain Dobbins of Worcestershire (1642-). Motto means 'While I breathe, I hope.'

Guidons were carried by dragoons. They were a similar size to cornets, but were distinguished by having a swallow-tail shape. The designs followed a similar scheme to infantry ensigns. 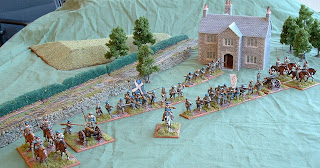 Right - I finished the artillery for my Covenanters (guns and crew from Tumbling Dice). So the army is complete and ready to march on Newcastle. Here are some images of the army arrayed. 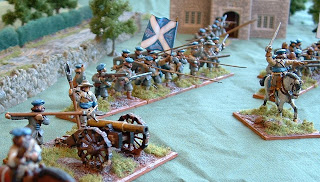 The manor house in the background was a real find. It is a card model from Metcalfe Models, designed for use with HO/OO railway layouts. It was a joy to put together, everything fitting perfectly. It probably has some anachronistic features as it it supposed to be a renovated C17th manor house still in use in the C20th, but I have pretty much left it as is, just repainting the modern door, and changing the date above the door from 1679 to 1629. I am going to mount this on a base with some sort of garden and enclosing wall, and will also get hold of a great church model made by Metcalfe.
After painting the dour Covenanters I'm desperate for a project involving colour. Swinging to the other extreme, I'm going to make a Maximilian Imperial army, using the Renaissance knights and Landsknechts from Dark Dream Studio.
Posted by Dux Homunculorum at 5:21 PM 7 comments:

I have just finished the foot component of my Covenanter army for DBA-RRR. This consists of 5 elements of pike and 5 of muskets, based in my usual unorthodox manner. The figures are nearly all Tumbling Dice, with a couple of SHQ musketeers skulking in the background. The SHQ figures have loads of character, but their muskets look like toys compared to the (overscale) weapons carried by the TD figures. Pikes are all made from trusty broom bristles, and the flags were taken (with great appreciation) from the Project Auldearn blog.

These are just some hasty photos. I have two elements of artillery to go to finish the army, and then I'll post some images of them all in their dour Presbyterian glory.
Posted by Dux Homunculorum at 8:10 PM 3 comments: