New Insights into the Russian Revolution

Like most teachers, I normally experience the statutory authorities who set exams and curricula as sources of great exasperation and rage. Rarely do I find them hilarious.

However, this week the Victorian Curriculum and Assessment Authority (VCAA) reached new dizzying heights of incompetence by managing to include a source for the Russian Revolution in an exam paper that included the image of a giant killer robot.

The exam, sat by about 5700 school leavers in Victoria was intended to include this illustration of the storming of the Winter Palace in October 1917. 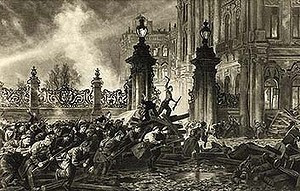 However, in an inspired move, whoever set the exam managed to copy a digitally altered version of the image from the net that featured a giant mecha robot thingy joining in the assaault: 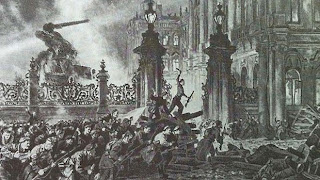 Genius. I shall be using this as a great example of the need to check one's sources.

What particularly amused me were the attempts by the VCAA to argue that the mix-up was really no big deal, and wouldn't really influence the ability of students to answer the question in the exam.

I'm no expert on the October Revolution, but I can't help thinking that most questions asking people to make use of a source featuring a gigantic robot might in some way be influenced by its presence. Sadly, media reports don't mention the specific question asked, but if it was something along the lines of 'Using Source A, explain the success of the October Revolution' I fondly imagine students weighing up whether to talk about the failures of the Provisional Government, or the fact that the Bolsheviks had the assistance of a GIANT KILLER ROBOT!

You can read more about this act of brilliance here.
Posted by Dux Homunculorum at 2:03 AM