I am at best a workman-like painter, but over the years I've developed a couple of different approaches to painting that I'm happy with. A quick glance around the blogosphere will find loads that put mine to shame. Heck, even I can do better! However, I have managed to find the balance I'm happy with between getting figures painted reasonably quickly and being generally pleased with the result.

This is a brief tutorial just running through the steps I use when painting 28mm dark ages figures. I'm mainly writing it in response to a request for some tips, but it may be useful to others getting started. Apologies in advance that the photos aren't great.

So, what we are painting today is a unit of 8 Flemish mercenaries for Saga, made up of metal figures from Gripping Beast. As they are a unit of professional mercenaries, I've decided that they are going to have a fairly uniform appearance, using the same colours on their shields. The shield designs are going to be very simple - for a guide on how to go about doing complex Celtic designs, see here.

First steps are to glue the figures together, stick them to their base with PVA and spray them with white undercoat. I prefer a white undercoat to black on 28mm figures. With 1/72 figures I undercoat in dark grey. 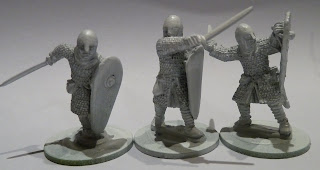 I then start by painting the faces and hands. The general principle, which sounds a little dodgy, is to 'dress' the figure with paint, starting with the flesh and then moving from the inside out, as it were. So after the skin I paint the leggings and shoes, then usually the tunics. However, on figures like these Flemish I do the mail shirts before the tunics under them, usually painting the mail with gunmetal mixed with black, with a couple of drops of water added. There is time for highlighting later, but mail is not very shiny. For block painting areas like tunics and mail shirts I often use a small flat brush. 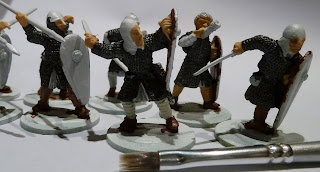 Now a word on colours. I mainly use Vallejo paints, with some Games Workshop, Derivan Minis and whatever other acrylics I've picked up along the way. When painting tunics and shields for ancients and dark ages figures, I always tone down bright colours by adding a little buff, medium flesh tone, light brown etc to take away the brightness of most yellows, reds and blues. Many paint colours are way to bright to represent the sorts of natural dyes that were used. In working out what colours to use, check out the great article on Model Dads Blog that shows the sorts of colours achieved by early medieval dyes. And while you are there, check out their article about basic colour theory, which will help you work out what colours look good with each other and why. But remember - tone the colours down, even adding a little grey, buff or brown if you are using white.

With all that in mind, I paint in the tunics, helmets, shields and so on. Flat brushes, by the way, are particularly great for painting the back of shields when they are moulded on to the figure.

Next I paint in all the details - belts, leather edging to the mail shirts, weapons etc. 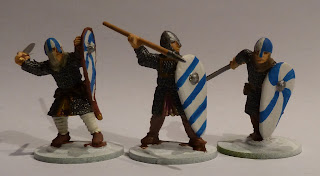 The figures are now carefully painted, but they need shading, and also need some protective coating to help them stand up to the rigours of being flung across the room in frustration when they inevitably lose me a battle. There are many approaches to shading, and mine is very simplistic. I consider thant now I've painted my basic colours I need to add a deep shadow and a light highlight, so that the final product has three layers of shade. I add the deep shade and the protective coating first by using an equivalent of the 'dip' method. However, I don't use the Army Painter dips but an acrylic furniture polish you can read about here. I also don't dip the figure, but carefully brush it on so that it doesn't darken the figure too much or pool goopily in crannies like bent elbows etc. Essentially you can achieve a similar effect by using a wash, but this method also adds a glossy protective coating to the figure. This is also a good time to add some sand in random patches to the base and stick some magnetic sheet to the figure's bases so they won't rattle around in the tool box I carry them in.

The glossiness looks vile, so leave the figures for 24 hours then give them a spray with matt varnish. I've started using Tamiya Flat Clear for this, which is a recent development. I was generally brushing Vallejo matt varnish on, and still use it to touch up any bits I missed, but the spray is quick and so far gives good results. Be aware though that spray varnish can be temperamental, particularly when it's humid. That's better, but now they look a bit dull and flat.

Now I add the lighter shades, focusing particularly on the hands and faces, mail shirts or tunics, blades of weapons and large areas like the shields. Basically, if I've painted a tunic in a dulled down violet red, for example, I'll add more buff to the same colour to make lighter tone and use it to highlight areas like elbows, the highpoints of creases etc. You can see on these figures that I've added a lighter shade of blue to the designs on helmets and shields and so on. Painters better than me would probably build up several lighter shades and also do the belts etc, but I find my approach gives the figures enough 'ping' to stand out on the table, at least to my eyes.

Finally, drybrush some light grey, brown and or buff over the sand texture you added to the bases, add some flock, tufts and maybe flowers, and they're done.

So there we are, and I hope somebody finds this useful. The most important thing with painting is just to find the balance you're happy with between getting lead on the table and taking some pride in what you've made. In other words - enjoy it!
Posted by Dux Homunculorum at 4:23 AM