It has taken me ages to get around to finishing them, but at last I've completed some levies for my Pagan Rus SAGA warband. As mentioned in a previous post, I really like this faction, particularly since I was quite involved with playtesting it. Adding a unit of Levies is a useful way of giving the warband some missile weapons, but more importantly the ability to soak up casualties when playing factions like the Jomsvikings and shielding more important units.

I've maintained the black/white/red colour scheme of the rest of the warband on the Levy's shields, but given them more Slavic designs such as sun wheels.

And just because I like them so much, here are a couple of pictures of the complete warband. 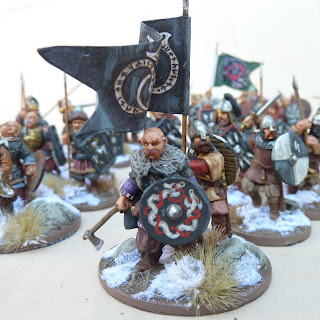 Posted by Dux Homunculorum at 4:56 AM