SAGA with the Little Valkyrie 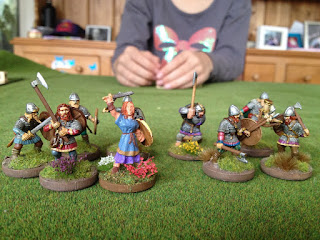 The Mini Duchess, my very own little 8 year old Valkyrie, had a great time last week painting up one of the great new believable female shield maidens from Annie at Bad Squiddo Games. The Mini Duchess named her Frygga, and yesterday we got her out on the table for a game of SAGA. 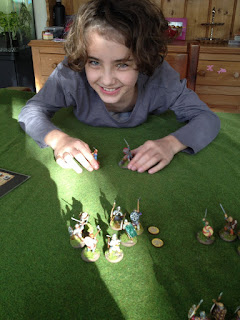 The Mini Duchess had never played SAGA before, or indeed any game involving moving figures around and rolling dice. Basically, we worked out a story where my three points worth of Scots were holding Frygga's father prisoner, and Frygga was trying to rescue him, along with three points of Vikings (2 hearthguard and one warriors). We used the rules from the hostage scenario found in Crescent and Cross for the way a couple of my Scots hearthguard had to remain as the escorts for the captured Viking warlord. To simplify the game, we only used the left hand column of the battle boards, so rolled SAGA dice for activation, activation pool and combat pool, but for none of the other abilites on the boards. I explained to the Mini Duchess the basics of movement and activation pretty quickly and we played a turn. Then in turn 2 I explained how fatigue works. In turn three we had our first combat, so I could explain rolling to beat armour scores and saving throws. 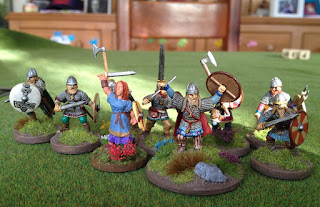 The game went really well, and I was surprised how quickly the MD picked up on the rules. She also showed some good tactical ideas, for example by maintaining her focus on rescuing the Viking warlord instead of wasting time picking off a weak Scots unit. I ended up being unable to get the Viking warlord off the board; his escorts were killed, and the Vikings rescued him. The Mini Duchess had a blast, we have some more shieldmaidens to paint, and 'SAGA lite' proved itself as a great little beginner's game.
Posted by Dux Homunculorum at 10:47 PM