Anyone coming to MOAB? 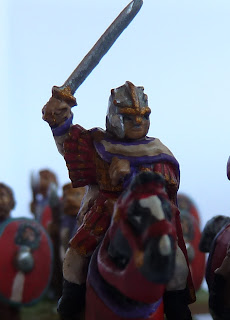 The Dux doesn't get out much, but is planning a ducal visit to MOAB on Saturday 1 October. Anyone else coming? It would be nice to meet some of you in the flesh.

In fact, I have even succumbed to the suggestion of My Lord Hotspur and signed up for the 15mm DBA competition on Saturday! This will be interesting, and no doubt humiliating, having never played DBA in a comp, and not at all for about 5 years. The competition is for matched pairs, so I have dusted off my old 15mm figures I painted for DBM in 1993-4, and recruited a late Roman army and the Ostrogothic army of Radagaesus. I have quite an affection for these old figures, painted back in the days before shading or washes, and before I realised that card bases warp and Essex figures look like gnomes.

I have given them a bit of a once over, splashing about some Devlan mud, improvising some camps and fixing up a few shields and bases here and there.

I'm heading down across the Brandywine into the Shire to have a game with Hotspur tonight, so I'm sure he will be gloating on his blog by this time tomorrow. 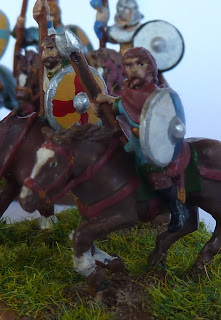 Posted by Dux Homunculorum at 10:15 PM