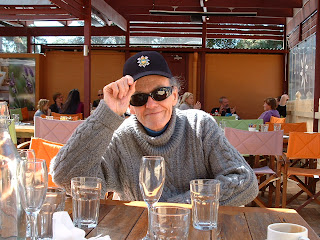 It has been a sad week here in the Duchy, with my dad dying suddenly on Monday morning. Dad was born in Shanghai, living a privileged British colonial experience until 1942, when he and his family were interned by the Japanese as enemy citizens. That experience gave him a lifelong deep insecurity, as well as poor health, but he managed to cope with moving to a strange country (Australia) after the war and raising a family without ever losing his basic kindness and sense of humour.

Among many other things, I owe to him my hobby. I was very lucky to grow up in a house where games of one sort or another were being played all the time, and everyone had some sort of crafty-arty hobby. Between us my brother and I made most of the Airfix catalogue, and I have many happy memories of blazing away at 1/32 Airfix Napoleonic figures on the dining room floor, firing nails from Britains cannons. When he used to smoke a pipe he would also enliven our games by blowing smoke into model buildings - I remember storming some wooden building with my Airfix paras as smoke curled out of the windows. Probably dad's finest hour was coming up with a naval game, for which he painted a couple of massive boards as oceans on which we maneuvered miniature warships. As I have grown older I've become better at painting, my games are more sophisticated, but I have never lost the basic 'joy and forgetfulness' in games(thanks Conrad!) that I learned from my dad. Dad was never a prolific painter, being too much of a perfectionist, and it was something of a running joke between us that he has been tinkering with the one box of Airfix 1/32 Napoleonic Highlanders for literally about 35 years. This must be some kind of record. I shall have to finish them for him one day.

So for you dads out there, keep playing games with your kids, and if anyone feels so inclined, lift a glass, preferably of single malt, to the memory of Arthur.
Posted by Dux Homunculorum at 11:13 PM