Thanks so much to everyone for their condolences about my father. It meant a lot to me, and I know dad would have loved the thought that some fine men from the four corners of the world had raised a glass to his memory. 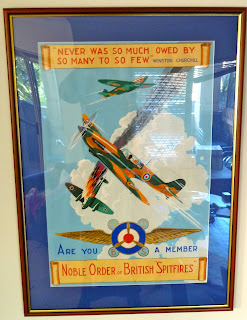 This is something I have been getting around to putting up on the blog for ages, and now seems particularly opportune. A few years back dad had this poster framed for me - apologies for all the reflection in the photo. It is a screen printed poster that his father picked up in Shanghai. The Noble Order of British Spitfires (or NOBS - nice) was a fundraising campaign aimed at the expat British community in Shanghai, where my father was born, at the start of WWII. It must have been produced after August 20 1940, when Churchill made the speech quoted on the poster, and before the end of 1941, when the Japanese took over the International Settlement. Donations were recognised by a rather spiffy lapel badge of the same design as the central logo on the poster. We have one of these at my parents' house, embedded in a table with some other badges.

I'd be chuffed if anyone can shed any further light on NOBS. Was this particular to Shanghai? Has anyone heard of it before? As far as I know, this may be the only poster still in existence, but I'd love to know if anyone has seen one before.

According to dad, the posters were made by a German-Jewish refugee printer in Shanghai, which makes the image of the HE-111 with prominent swastika going down in flames extra poignant.
Posted by Dux Homunculorum at 10:51 PM