Last night I caught up with gaming buddy Daniel at Good Games in Sydney for a 500 point game of BGK. I fielded a German Panzer battlegroup with a platoon of Panzergrenadiers, five Panzer IVs, an Sdkfz 231 and some off-table mortars. Not what I would have used in an ideal world, but pretty much all the German stuff I have painted at the moment. Daniel slightly disconcertingly was proxying his very nicely painted British as Soviets, with Shermans and Fireflies standing in for T34s and Achilles tank destroyers as SU76s. Daniel's force was nearly all armour, with the minimum infantry required, a couple of White scout cars (looking suspiciously like Bren Carriers) and a truck to resupply his tanks. 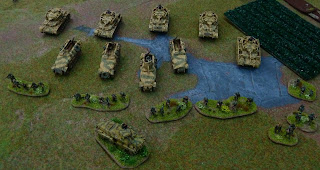 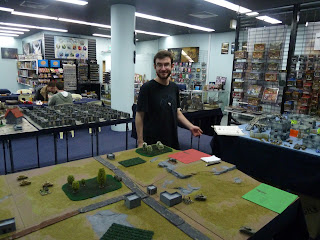 Daniel having a good time

The kids are all over me at the moment so I don't really have time to do justice to an AAR. Basically I had a great game. BGK is enormously good fun. IT certainly has a steep learning curve, and it takes a while to get your head around the different procedures for different types of fire - we were flicking back and fort through the book a lot, and some situations had us scratching our heads, but I felt steadily more confident with the core rules as we went along, and even more complex things like calling in artillery support started to make sense.

The game we played was a basic meet-and -greet scenario. One of the great things with BGK is the way that battles develop in a realistic way, starting with reconnaissance units controlling parts of the table and then main force units steadily moving on to the table. 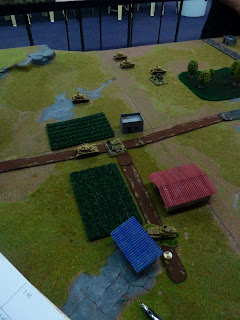 By about turn 4 my armour was on the table, joining the lonely armoured car that had attempted to spot a target for mortar fire since the start of the game, and was now pinned by Soviet fire 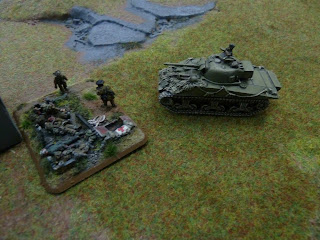 One of Daniel's nicely painted 'T34s' seizes an objective 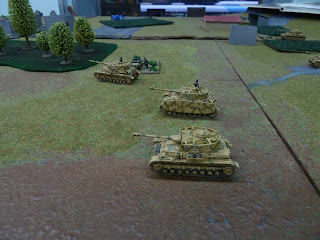 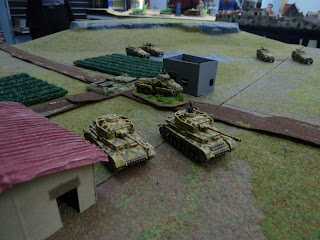 My armour charges across the table, for some reason, intent on damaging the Soviet build-up before all Daniel's tanks arrived 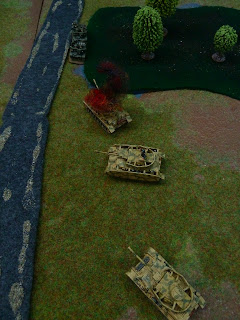 Not such a good plan. My Panzer IVs start brewing up 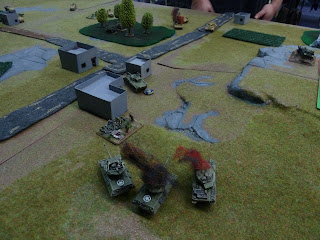 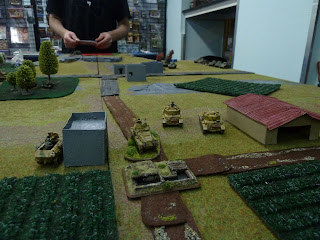 Trading shots at close range. The Germans were never going to win this war of attrition 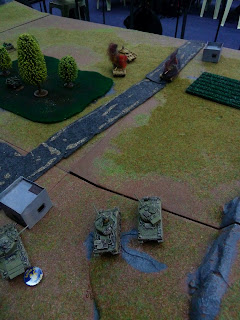 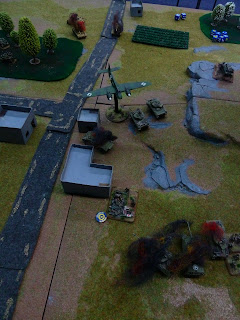 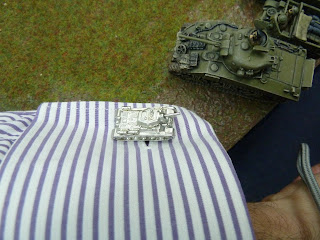 The only actual T34 in evidence - my cufflinks

I eventually threw in the towel with one immobilised tank still in action and no AT weapons left to stem the Soviet advance. Interestingly however, Daniel and I had taken very similar losses to our overall battle rating, the measure of how close the battlegoup as a whole is to cracking. With hindsight, I can see lots of ways I should have played this differently. In particular, I would now make greater use of area fire to try to pin enemy units, rather than closing in to try to knock out tanks with AP. I would also make better use of reserve fire to try to maximise my firepower against the numerically superior Soviets.

I just love the level of detail in BGK; the things like keeping track of ammo and having to pass radio checks that I'm sure would send some people screaming. It really succeeds in creating the feel of a battle that builds slowly as the commanders try to make best use of a whole range of resources. I can't wait for my next game.
Posted by Dux Homunculorum at 4:00 AM