Oh good! Something else shiny to spend money on! 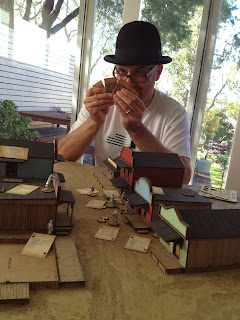 Lots happening in the Duchy at the moment. I've been prepping loads of figures ready for the Painting Challenge, but also busily building some terrain for Dead Man's Hand. Yep, a new game.

Dead Man's Hand started catching on with the club at school in the last few weeks of term, and predictably I ran amok with the credit card and bought loads of the thoroughly brilliant 4-Ground buildings. Don't tell the Duchess. I really like the idea of making a town that all the action will take place in, particularly once campaign rules come out at the start of next year with the Legend of Dead Man's Hand expansion.

So, after a trip to Bunnings I prepared a 90cmx90cm board, screwing on battens on each edge to stop the board warping and help it weigh a ton. A nice thing about the 4-Ground buildings (love 'em!) is that they have a limited number of standardised bases, so by gluing bases and boardwalks in place I can store the buildings separately and move them around a bit for some variety. 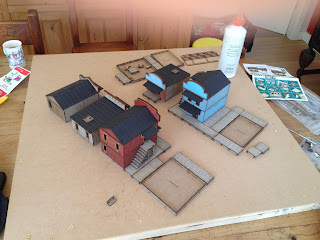 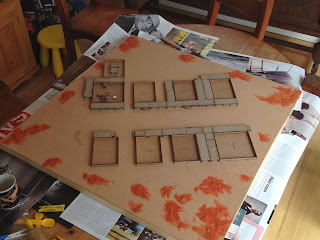 With the bases glued down I used Das to cover the screws, and add a bit of texture to the board, then painted the lot with Dulux Cookie Dough. I adopted an unsophisticated but effective approach to texture by chucking a few handfuls of sand into the paint, and having a tin of dirt on hand to dip my brush in as I was painting. 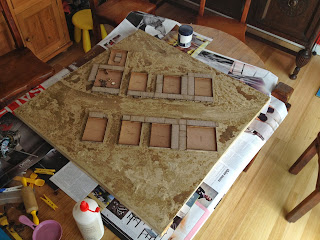 Next I gave the whole thing a wash with very diluted raw umber, and since the last photo I've sprayed it over with some light sand to bring the colours together.

I've still got a couple of buildings to put together, but when Comrade Antonius visited yesterday we put on the soundtrack to The Good, The Bad and the Ugly, got out some unpainted figures, and had a game of Dead Man's Hand. If you haven't played it yet, it's a doozy. Very simple, very fun and with loads of character. It has certainly had me doing some serious 'research' by watching a host of Westerns. Yee Haw! 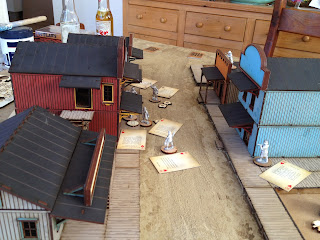 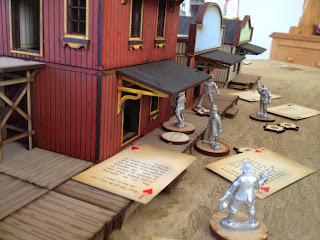 Posted by Dux Homunculorum at 11:46 PM