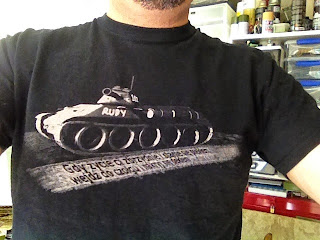 When in Krakow, I wandered into a cool alt clothing store - you know, where you have to step over the bongs and tie dye to get to the T Shirts. I was having a look at this one when the young woman who worked there asked if I wanted a hand. She looked the part - dreads, piercings, tats - and spoke English. We got chatting and I asked her what the words on the shirt meant, and from memory it translates as 'If you want to know what hell is like, climb into a tank and close the hatch'. She told me it was a quote from a famous Polish TV series. I asked if it was from 'Four Tankmen and a Dog', and she told me it was. She was amazed that I knew of it, and told me she grew up watching it every year on TV.

Four Tankmen and a Dog (Czterej pancerni i pies) ran from 1966-1970 on Polish TV. The 21 episodes followed the adventures of the crew of a T34/85 tank in the Polish First Army (as part of the Soviet army) during the last year of WWII. It was pro-Soviet propaganda, but also proudly Polish enough that it seems to be still fondly remembered by many of those who grew up with it. Well worth a look (on Youtube) during this special time of the year. 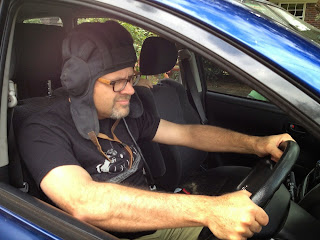 Posted by Dux Homunculorum at 12:20 AM