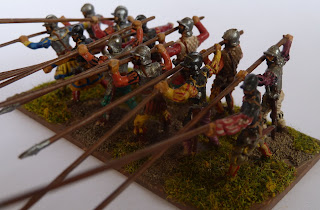 This is a project I was working on at the beginning of the year, until other things grabbed my attention.

After painting up some 1/72 Landsknechts and Renaissance Knights from Dark Dream studio (which have already appeared on the blog) I set out to find other figures that could be used for the Italian Wars of the early 16th Century. A more sensible person would look to the many beautiful 28mm or 15mm figures that are available, but I was interested in testing out my ability to convert 1/72 scale figures to fill the lack of Italian Wars stuff in that scale.

So, what did I have to work with? The best resource for making Spanish and Italian infantry and jinetes cavalry are the boxes of Conquistadores from Caesar and Revell. The Revell figures are sadly our of production, although poorly pirated copies of most of the Revell set are available from Mars.

The Caesar figures are quite nice, but there are no pikemen in the set. Lots of pikes are obviously essential for Italian Wars, so I messed around converting sword and buckler-armed Spanish into pikemen. The good news is that the plastic Caesar use is quite soft, and it is easy to carve things like bucklers away with a sharp knife. 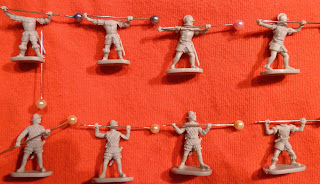 Basically, I cut away the swords and bucklers, then twisted the arms of the figures into plausible positions for holding pikes by sticking a pin through their hands. From what I've been able to find out, there was no formalised pike drill in the 1520s, so it is easy to have the pikes in various positions, in contrast to soldiers of the 17th century. To make this easier I cut some slits at points like elbows and armpits. I then dunked the figure into boiling water, while wearing rubber gloves. The Caesar plastic goes instantly very rubbery when you do this. Then I dunked the figures into a bowl of cold water to set them in their new position. 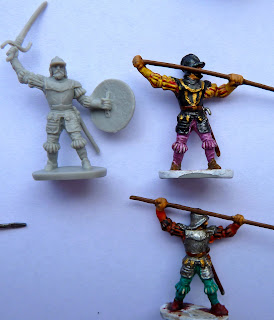 After getting the arms into position, I used greenstuff to fill in gaps at the armpits etc, and also added some variety to the pikemen by giving some of them bases (military skirts) or slashed clothing. 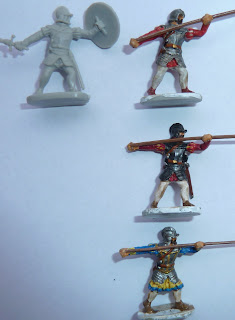 I also changed some of the heads for variety, and particularly had to swap any heads wearing morion helmets. These are incorrect for the 1520s, so I replaced them with more suitable cabassets and even some sallets from a set of 15th century figures from Miniart. The pikes are broom bristles. 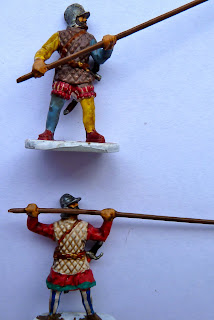 Now that I've based them, I'm reasonably happy with how they turned out. They were a lot of work, but it was challenging and fun trying to imagine figures in different poses - not something you can do with metal figures! I might do some more at some stage, but I do wish someone would decide to put out lots of lovely 1/72 figures for this period. 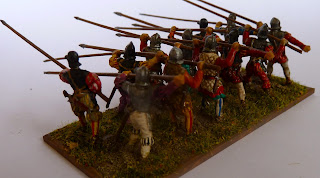 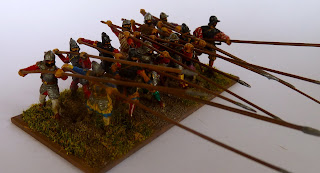 Posted by Dux Homunculorum at 8:16 PM