Anglo-Saxons (and a blue unicorn)

I'm on a mission at the moment to finish everything I have on my painting tray before Christmas, and I'm nearly there. These six Anglo-Saxons have been sitting in a semi-painted state since around June, so it wasn't a big job to get them finished. One job for the new year will be to do up the rest of an Anglo-Saxon warband for Saga. 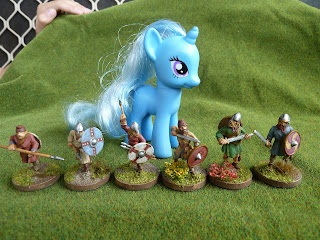 The three figures on the left are from Miniature Design Studios, the three on the right from Black Tree Design. As you can see, they are very compatible in size. I like the BTD faces. The MDS figures don't have as much character as other ranges, in my opinion, but they look good as rank and file, and are very cheap when MDS has its warband deal on, costing 25 pounds for 50 figures.

Oh, and the massive blue unicorn is there because the Mini Duchess thought it ought to be.
Posted by Dux Homunculorum at 8:26 PM