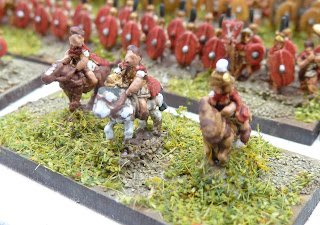 I've finished Phil Broeders' prize, and the Legio Homunculorum will soon be packed up and on its way to its new home in the UK. 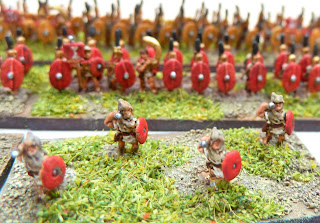 So, what are my conclusions after this first foray into painting 6mm figures? On the whole I really enjoyed it. My eyes certainly hurt a bit more than normal after a painting session, but I was impressed with how easy it was to paint these little chaps and with how much detail Peter Berry at Baccus has managed to include. When I showed the result to the Duchess, and after she had overcome her indifference, she remarked 'wow, they really look like an army', and I think that sums it up.

Would I paint more 6mm figures? Yes, I would. As Richard Clarke suggested in the latest issue of Wrgames, Soldiers and Strategy, every scale has its uses. For me, 28mm is a brilliant scale for skirmish games, and also for Dark Ages battles that generally did not involve huge numbers. They also have individual personality, perfect for games like SAGA. On the other hand, I just can't see myself ever wanting to put the effort into painting a 28mm Napoleonic army. The available figures are stunning, but to my mind a unit of 28mm Napoleonic infantry just doesn't convince as a battalion or regiment or even company. I am seriously considering 6mm for either Napoleonics, 2nd Punic Wars or Wars of the Successors. Something where units look reasonably uniform. I certainly wouldn't want to paint an army of, say, Ancient Britons, where every figure should look distinct. I have always had a hankering to play Quatre Bras, and 6mm might be just the ticket.

Brilliant! Another scale to be interested in. Thanks Phil! May the Legio I Homunculorum bring you victory. That's me on the white horse, by the way.
Posted by Dux Homunculorum at 11:48 PM