British Armour for Battle Group Overlord and Fall of the Reich 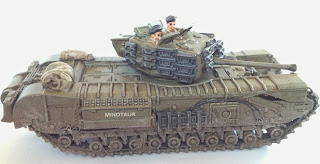 Today I finished my first batch of late war British Armour for Battle Group. Apologies for the dark photos, but here is what two boxes of the lovely 15mm Churchills from Plastic Soldier Company look like painted up.

I loved putting this lot together, and it was also the first time I tried out the new PSC Army Sprays paint. I was impressed - the British armour spray covered well and left an excellent finish. The tanks were all covered with extra track links from some spare Sherman sprues, along with some tarps and other impedimenta from SHQ, Skytrex and modelled from wine bottle foil and greenstuff.

These Churchills are nearly all from the Coldstream Guards, part of the much-photographed 6th Guards Armoured Brigade, and are based on their appearance in early 1945. 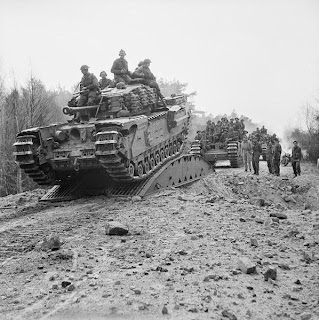 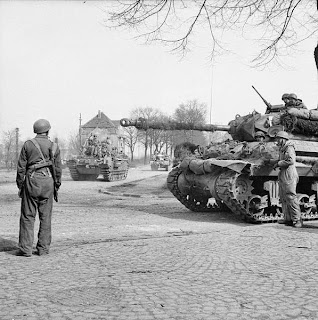 The individual tank names in the 6th Guards are well known, making this a nice unit to build. For detail, see this excellent site.

For my force I've made the tanks from three troops (Nos. 11-13) of C Squadron, 4th Battalion Coldstream Guards. No. 11 and 13 Troop are made up of Churchill VIs, while No. 12 Troop (identifiable from the lack of crew figures) is made up of Churchill IVs, armed with the 6pdr. I have no idea in reality which tanks were IVs or VIs, but my understanding is that the 6th Guards contained both types in order to retain the superior AP qualities of the 6pdr with the better HE of the Churchill VI, which was armed with the same 75mm gun found on the Cromwell. Indeed, I think I'm right in saying that the Mark III and IVs were all replaced by Mark VIs in late 1944, but some were brought back to give the units better anti-tank protection. By early 1945 some of these tanks should probably be the better armoured Mark VII, but unfortunately the turret and hull of the later mark is sufficiently different that PSC couldn't fit the option into their box, despite the fact that the box art actually depicts the mark VII! The BG rules reflect the slightly better AP quality of the Mark III and IV over the Mark VI, so it will be fun to try to use my specialised Troops in cooperation with each other.

First up, No. 11 Troop, with Bandit, Buccaneer and Bulldog.

No. 12 Troop, of Dreadnought, Defiant and Dauntless.

No. 13 Troop, with Minotaur, Minerva and Medusa

The tenth tank is an AVRE from the 79th Armoured Division, but I'm still waiting on some decals to make this apparent. On the subject of decals, all the vehicle names and unit markings are from Dom's Decals. Dom has a pretty comprehensive range of decals for the British in NW Europe in several scales, along with all sorts of other great stuff. Delivery isn't quick, but they are worth the wait.

Well that wraps up the Churchills. Off the assembly line today were also two Skytrex M10 Achilles. I'm slightly baffled as to what markings to give these, although most of them are probably covered by stowage anyway. The 6th Guards didn't have organic tank destroyers, so when they appear working together (as in the photo above) they must have come from some independent RHA unit. Anyone have any clues?

I'm liking the fact that in BG the survivability of Churchills will depend a lot on their ability to act as part of a combined arms team, maneuvering under the cover of tank destroyers, for example. Quite a different set of challenges to, say, those of the Germans in Battle Group Kursk, whose tanks are much more versatile. 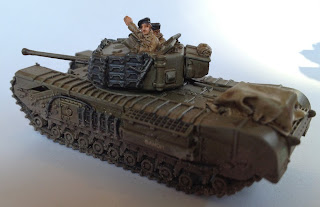 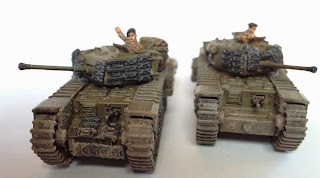 Time now to get stuck in to some Ram Kangaroos that are in the painting queue. But of course, Happy Easter to all. 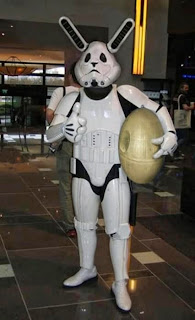