The stunningly beautiful figures being sculpted by Alan Perry for Napoleon's retreat from Moscow have certainly succeeded in seducing a number of people to paint their first 28mm Napoleonics, and I'm certainly among them. Inevitably, painting up a bunch of 1812 French is going to make some of us want to tackle a figure of Marshal Ney himself, reputedly the last member of the Grande Armee to leave Russian soil. This post is a review of the 28mm figures available to represent Ney during the retreat of 1812.

Actually, as far as I'm aware, there are only two manufacturers who make suitable figures: Gorgon Studios and Eureka Miniatures. And here they are. In the facing photo, Eureka Ney is on the left, with Gorgon Ney on the right. 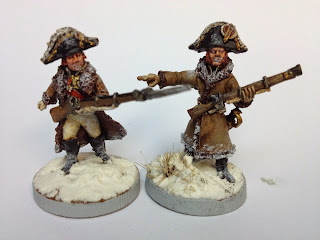 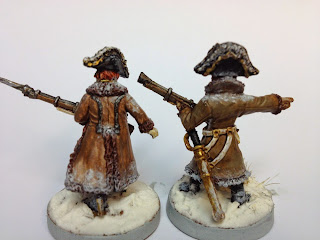 To begin with, I have nothing but praise for the customer service of both. When I put in an order with Gorgon Studios for the Ney figure and some of their lovely Western figures based on characters from True Grit, their silly online cart quoted me an obscene postage cost. I emailed them to query this, and heard back straight away with a more accurate quote, and after I completed the order they even chucked in a couple of extra figures, so one very happy Dux.*

As for Eureka, the Ney figure doesn't even feature in their catalogue, as I think they originally made it as a convention figure of some sort. However, when I contacted Nic from Eureka, he very obligingly went out of his way to track one down for me and send it off.

Comparing the figures themselves, both were beautifully cast and required almost no clean up. Eureka Ney had a little flash due to the undercut between his legs, but that was it. Gorgon Ney came with a slotta base, and I must say that I really liked the metal he was made out of. It clinked, which I suppose indicated a high tin content. I know I'm sad, but he really did clink.

Turning to the sculpts themselves, scale-wise they both mix perfectly well with the Perry retreat from Moscow figures, as should be apparent from the comparison photo of both Neys with a Perry dragoon. Eureka Ney is perhaps a tiny bit shorter, but I think that's mainly due to his leaning pose. The poses of both are full of character, and detail is superb. I think the detail of Gorgon Ney is more apparent when looking at the bare metal, and I only fully realised the superb detail of Eureka Ney when I started painting him. 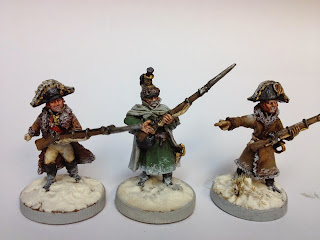 It's when we come to some of the uniform detail that I think Eureka Ney has the edge. Both figures are clearly based on the famous painting of Ney commanding the rearguard by Adolphe Yvon, which was painted decades after the events it depicts. 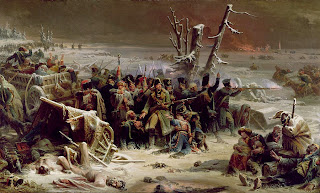 Eureka Ney is a pretty faithful rendering of how Ney appears in the painting, with his coat open to show details of his uniform underneath and decorations. Gorgon Ney may well be a more plausible version of how Ney might have looked, with his coat done up against the cold and his collar turned up. The one thing I did find difficult about Gorgon Ney was the sculptor's (Mike Owen, by the way)decision to model Ney wearing his sword belt over his coat. I'm ready to be proven wrong, but I'm not sure this would be likely. Sadly, from an aesthetic point of view at least, Gorgon Ney is missing some of the details on his coat that appear in the Yvon painting. The sculptor of Eureka Ney has also clearly consulted other more contemporary portraits of Ney to model details of his uniform and decorations. 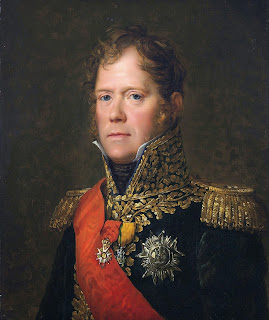 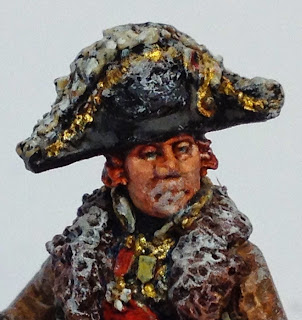 So there we have it. Two lovely miniatures that do their subject proud. Both were a joy to paint, and either would fit in beautifully with my Perry figures. But since you press me, if I was on my way to a desert island and could only take one, I'd grab Eureka Ney. I certainly hope that Eureka make him more generally available; he is a great figure who deserves to grace many a tabletop. 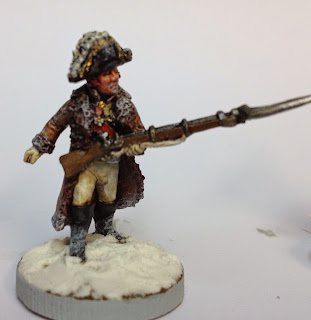 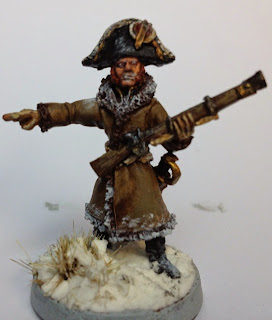 *Parenthetically, what is with some of the e-commerce sites people use that quote ridiculous postage? Gorgon followed up my query really well, but I'm sure many potential customers just wouldn't bother contacting them and would just give up instead. While we're on this, I had a completely contrasting experience when I attempted to order some figures early this year from Blue Moon. The amount their site added for postage was absurd, and I contacted them to query it. I rapidly received a reply telling me that, yes, the site always quoted very high postage which was corrected when they actually completed the order, and that someone would get back to me to give me a more accurate idea of the cost. The days turned to weeks. A dog barked in the distance. Nothing more was heard. Blue Moon didn't get my money, and I failed to add another stratum to the lead mountain.
Posted by Dux Homunculorum at 4:17 AM