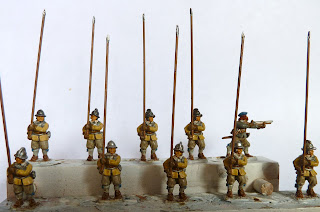 There has been a lot of muttering from the Homunculi recently about the way I have neglected The One True Scale of 1/72. 'Airs and bleedin' graces' I've heard them say - 'jumping on the bleedin' 28mm bandwagon, Saga this, Saga that...' The discontent has naturally been most felt amongst the unpainted 1/72 brethren.

To keep the little blighters happy I have started on one of the big projects for 2012 - reorganising, rebasing and preparing more figures for 1/72 ECW, using Basic Impetus Baroque rules. I had some unpainted pikemen from Tumbling Dice lying around, so started with them. Nice figures - a bit chunky and 'wargamey', but dead easy to paint. These lads will join a Covenanter regiment. Truth be known they are probably too well armoured for Covenanters, but the priority at the moment is to just get some figures on the table and have some games. And to keep the Homunculi happy, of course.
Posted by Dux Homunculorum at 4:32 PM