I have been giving some thought to modifying Saga for the late Roman period (4th-5th centuries) and have come up with a draft battle board for western Roman troops. I have copied some abilities from existing boards, but added new ones to try to capture the greater command and control and interaction between units we might expect from drilled troops. Here's the draft battle board, with a huge thank you to damianlz from the Saga forum, who reformatted and improved the graphics of my original version: 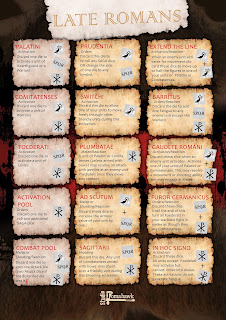 This warband represents an ad hoc force of Roman troops in one of the western provinces during the later fourth or fifth centuries AD. They may be engaged in raiding barbarian territory, but are more likely to be responding to a barbarian raid or an uprising of disaffected peasants or regional separatists.
Palatini are the Hearthguard of the Late Romans. These are troops belonging to one of the elite units of the comitatus (Imperial field army). Palatini may be mounted, governed by the usual rules for mounted troops.

The Levies of the warband are Foederati. These are Germanic troops (eg Franks, Burgundians or Goths) who were settled on Roman land from the fourth century and obliged to pay taxes and give military service. This they increasingly did without being assimilated into the Roman army, so should be represented as barbarian auxiliaries. They may be armed with bows or javelins.

Some explanations:
Barritus
This was a war cry, mentioned by Ammianus Marcellinus, Germanic in origin but used by Roman units. The effect represents its intimidating effect on the enemy.
Plumbatae
Plumbatae were lead-weighted darts carried by late Roman troops. When this SAGA ability is used, the attacking unit suffers a javelin attack by the defending Roman unit as they move into contact with them. The effect of this is resolved before Step 1 of the Melee. This is not an Activation or a Shooting ability, so cannot be effected by any Shooting Reaction abilities.
Extend the Line
This is one of the Late Roman abilities that reflects the superior drill and training of the Roman troops. It may only be used by Palatini or Comitatenses. Up to half the figures in one of your units can be moved, so long as their final position conforms to the usual rules for unit cohesion.

I haven’t play tested these yet, but would be very interested in people’s reactions, especially if anyone wants to try them out.
Posted by Dux Homunculorum at 9:44 PM