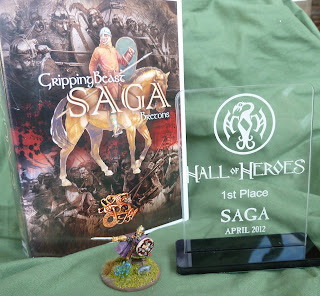 Carlsberg don't run wargames shops, but if they did, they would look like The Hall of Heroes (HOH). On Saturday I trekked out to HOH at Campbelltown (on the fringe of the urban sprawl that is Sydney) for a Saga tournament. It was my first time at the shop, and later in the week I want to write a separate post about why I think it is such a brilliant place. Today I'll confine myself to a quick rundown on the competition. We played 3 games, using 4 point warbands that couldn't be altered. We were originally supposed to play 4 games each, but didn't quite have enough time. The scenarios were Clash of Warlords, Sacred Ground and the Escort. I actually hadn't played the last two before, and doing so just made me love Saga more. I used my Welsh, fielding two units of Warriors, one unit of Hearthguard on foot, and one unit of mounted hearthguard. There seemed to be a lot of Welsh there on the day, actually. Could hardly move for goldy-looking chains. Surprisingly, nobody brought any Normans along. 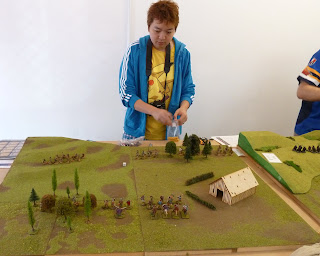 I played Kim in the first game of Clash of Warlords. Kim also fielded Welsh, but with a unit of Levies and all on foot. Very interesting match up fighting Welsh with Welsh. I was lucky to pull off a win, killing Kim's warlord in the final turn of the game. I think his decision to bring Levies along had a fair bit to do with the result. I was pretty much able to ignore them and bring everything in on his warlord, although I suffered cruelly from a unit of his warriors over on the right flank that hammered me with javelins. 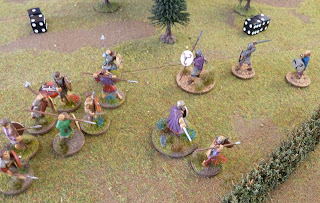 Homing in on Kim's warlord 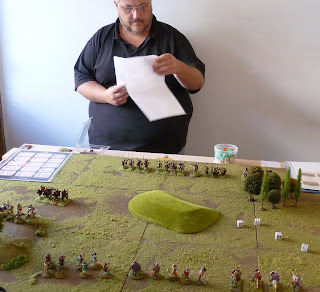 In game two, I fought Dickie in the Sacred Ground Scenario. Again - Welsh vs Welsh, although Dickie's warband was very interesting - everything mounted except for a unit of Flemish mercenaries. I was able to use Taunting on the Welsh battleboard effectively to get his cavalry into range of my javelins several times, and although his Flemish would have been incredibly hard to budge from any piece of Sacred Ground they occupied, they moved so slowly (especially when I slowed them down - heheh), that I had effectively broken the rest of Dickie's warband, including his warlord, before they could get into action. Another win to me, and an unlucky match up for Dickie, where his mobility actually turned into a liability against taunting Welsh with javelins. A depressingly common sight for Dickie as my warriors taunt his cavalry into range of their javelins. 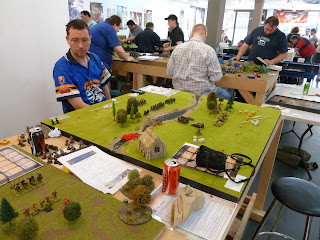 The third game was the Escort scenario, fighting Barks' Anglo Danes. God I hate the Anglo Danes. I also must have offended the Dice Gods by this point in the day, because in 6 turns, rolling 6 Saga dice each turn, I rolled a grand total of one dragon. This really stuffed up my plan to use Taunting and Hit and Run a lot to get his troops out of the way of my baggage. If you aren't familiar with the scenario, my goal was to get at least two of my three baggage units off the opposite board edge in order to win. Barks' Levies were definitely the Men of the Match, steadily slaughtering my warriors while I waited fruitlessly for some good dice rolls. Eventually I tried a dramatic, Schlieffen Plan-esque outflanking move with the baggage, preparing to sacrifice all my surviving troops to get them off the board. We had to call this game a draw, with two of my baggage possibly going to make it off the board, but certainly my entire warband doomed. I loved this scenario though, and would play it totally differently next time. The baggage elements in particular are actually very tough, and it is a mark of how badly Barks had mauled my men that I was thinking of using the baggage offensively by the end. 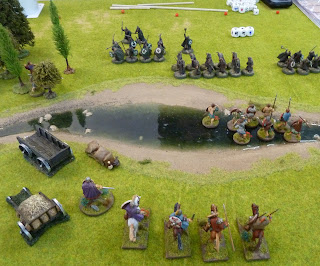 Trying to take advantage of my men getting hammered in the centre, the baggage head try to put a wood between them and the Anglo-Danes So, two wins and a draw, which meant that Barks and I drew overall in the tournament. We resolved this epically with a final confrontation between our warlords, with one retainer each. The Dice Gods smiled at last, and I won this comprehensively. Result - I won a tournament! Hall of Heroes presented the first three places with a very spiffy trophy, and from the very generous prize pool I scored a Breton starter warband! I think everyone involved in the day had a brilliant time. The atmosphere was incredibly friendly and generous-spirited. I thoroughly enjoyed playing against my three opponents, none of whom I had met previously. All in all, a golden day, and the feasting of the Welsh homunculi went on all night. A huge thank you is due to the guys at Hall of Heroes for hosting the event and running it so well, and also to Ian at War and Peace Games who together with HOH provided the fantastic prizes. Thanks and congratulations to the other Warlords, and special thanks to Barks for giving me a lift home! 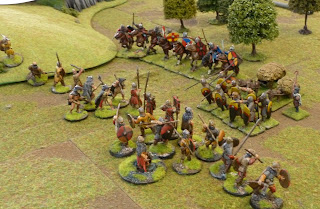 Damian's Jomsvikings get stuck into Dickie's Welsh
Posted by Dux Homunculorum at 4:30 AM