I just finished a project I started at Christmas - making the Revell Viking ship as a piece of terrain for SAGA. I changed my mind a couple of times about whether I wanted it beached or at sea, but in either case I started by hacking it off at the waterline. I made a bit of a mess of this. Ultimately I decided to have it beached, so it looks like it is sunk into the beach too deeply, but hey. I mounted it on some mdf and added a beach texture with sand and some breaking surf from DAS modelling clay. The furled sail was made from material soaked in PVA. 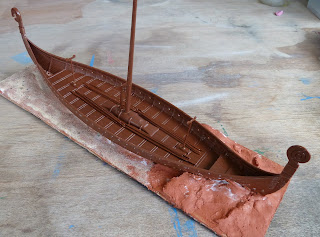 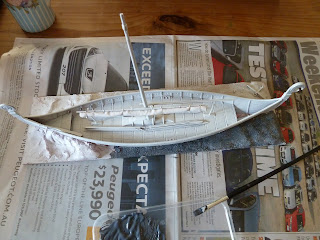 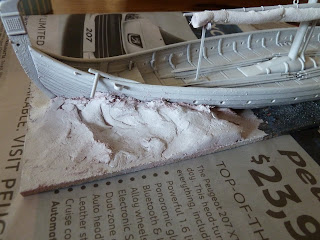 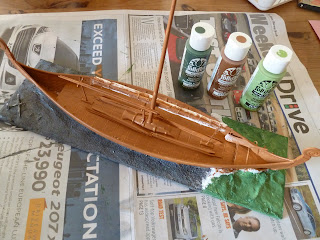 I started painting the base with some acrylic craft paint I had lying around. Then I simply painted the ship with some craft paint, before painting it over with Cabots woodstain and spraying it with Tamiya matt varnish. I am very pleased with the effect - the Revell kit has beautifully modelled woodgrain that the varnish picks up nicely. The surf was finished with shades of duck egg green, blue-grey and white before having a couple of layers of gloss varnish brushed over it. I will probably do another couple of layers when I buy some more. I finished it off with some simplified rigging, extra simplified because I managed to throw away the blocks needed to secure the rigging forward of the mast. Duh. 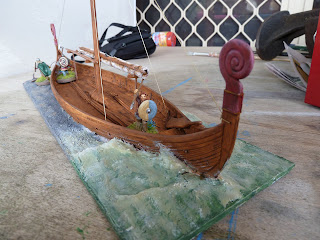 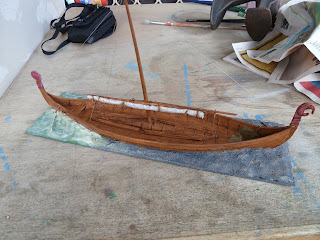 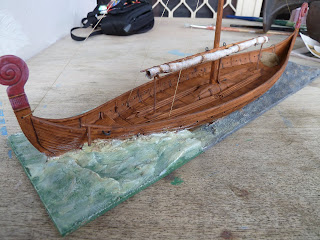 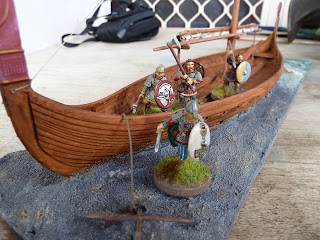 I'm pretty pleased with the final result, and it will do the job as an objective marker in SAGA. The beach is too dark, and I will try to lighten it with some shades of grey and light brown. Also, in retrospect, I would model the base so that it fits over the corner of a terrain board, like this fantastic example that puts mine in the shade. I will have to give some thought to making a section of coastline that the ship can fit into. In summary, I recommend the Revell kit - it's a cracker! Just have to keep it away from those pesky mermaids...
Posted by Dux Homunculorum at 4:31 PM