Here's another battleboard for SAGA in the late Roman period - the Huns! Huge thanks to damianlz from the SAGA forum for helping put this together. 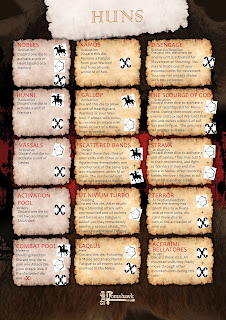 This warband represents the Huns of the late fourth and fifth centuries, and particularly from the time of their incursions into western Europe under Attila. The only literary sources for the Huns in this period were written by their enemies; Roman (Ammianus Marcellinus) or Romano-Gothic (Jordanes) authors who didn’t really understand Hunnic social structure and who described their customs with a mixture of horror and disgust. The Hearthguard of the warband are Nobles, who may be armed with javelins or bows and who are always mounted. According to Ammianus, there was no rigid social hierarchy in Hunnic society, and the ‘leading men’ influenced others largely through persuasion. It is likely that prolonged contact with the Roman empire helped to create a noble class. The Warlord is also armed with bow or javelins. I have simply called the Warriors of the warband Hunni, representing the great mass of Huns. They may be armed with bows or javelins, and are always mounted. The army of Attila that was defeated at the Battle of the Catalaunian Plains in AD 451 contained many defeated Germanic peoples (Goths, Heruli, Sciri etc). The Levies of the Hunnic warband represent these, and are called Vassals. They are all on foot, and may be armed with bows or javelins. They may also be armed as spearmen without missile weapons, in which case they roll an Attack Die for each two figures in Melee. Their categorization as Levies reflects their lack of enthusiasm for serving the Huns rather than innate lack of military ability. All Hearthguard and Warriors are governed by the usual SAGA rules for mounted figures. In addition, mounted units armed with bows fire as Levies at ranges between M and L, but fire as normal at ranges up to M.
Posted by Dux Homunculorum at 11:31 PM