Reasons to be Cheerful

The Duchess took the kids over to my mum's today to try to make sure that we all get a bit of rest and hopefully get over this foul virus, so I've largely been sleeping with a few bursts of hobby mooching throughout the day.

During the day I was taking stock of some of the great developments going on in the parts of the hobby I'm most interested in. As is often remarked, we are truly living through a Golden Age, and before going to bed I thought I might list some of the things I'm looking forward to, along with a couple of predictions.

This has obviously been a fantastic year for wargaming the 'dark ages'. There have been great figures around for a while, but usually early medieval games are not that exciting, and for many great rule sets (eg Impetus) what we might call the 'shieldwall period' is a bit peripheral to the core mechanics of what makes those games good. All this has changed though with SAGA, Dux Britanniarum and Dux Bellorum, three terrific games that tackle the core issues of warfare in the early medieval period in different ways, and do it really well. Within a couple of weeks the second SAGA expansion ('The Raven's Shadow') will be upon us, and I'm particularly looking forward to checking out the new Strathclyde Welsh faction on their shaggy little ponies. Here's the image of th new starter army from the Gripping Beast site. 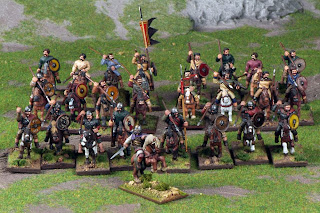 And if that doesn't get you excited about the Strathclyde Welsh, try this:

Along with the Raven's Shadow there is also the new Byzantine faction coming out for SAGA in Wargames Illustrated 301, and then two new expansions next year. So here's my prediciton, and let's see how right I am next year. This prediction is based on listening to Alex Buchel on the Historical Wargames Podcast, where he said that the next expansion will contain 6 new factions and be about 64-68 pages long. I predict it will be devoted to the Crusades (including Northern) and will include rules for big battle SAGA. Then I reckon they will shift back to the 'Arthurian' period for the second release of the year.

Meanwhile, the Lardies will be coming out with an expansion for Dux Britanniarum, bringing in the Picts and Irish. Nice.

Next month we can also expect Deus Vult!, the new medieval rules from Fireforge Games to support their beautiful range of 13th century knights and sergeants. Bolt Action is out and gaining rapid popularity, and Plastic Soldier Company has just released their Battlegroup Kursk rules. PSC have done an amazing job of muscling into the space occupied by Flames of War, and judging by the quality of plastic figures in the latest FOW box set are causing them to lift their game. If the PSC rules offer something more inspiring than FOW they might just tempt me to get my 20mm WWII out of the cupboard. The demise of Warhammer Historical has created fertile ground for all sorts of games dealing with the big battles (Hail Caesar, War and Conquest, Clash of Empires etc). I haven't played any of them yet, but only for lack of opportunity.

Another great development is the sudden surge in 'games in a box'. This was a discussion had by Neil Shuck, Richard Clarke and Henry Hyde on the 'View from the Verandah' podcast a couple of months back, where they were discussing the importance of newbies being able to access the hobby easily (ie by picking up a starter box set). Since then, we have a box set for Pike and Shotte out from Warlord Games, a Bolt Action starter box and the new Flames of War box (and probably others I've missed). This is a good thing. It has struck me (and surprised me somewhat) how much more comfortable new players in the school club have been to buy the official SAGA starter sets, for example, rather than sourcing their own (often cheaper) figures. I think at times I underestimate the learning curve of getting into historical gaming, so starter sets that hopefully find their way into more mainstream toy shops can only be a good thing.

Thinking about how new technology is altering the hobby is also interesting. We have seen in the past 12 months the rise of the 'kickstarter' concept of funding new games from their potential fan base, with Dreadball and Kings of War being two that spring to mind. The plastic revolution of course continues apace, as does the impact of computer aided design in miniatures. This is perhaps not a completely unmixed blessing. Vehicles look fine, but the CAD figures produced by Wargames Factory leave me a bit cold.

Which brings me to my second prediction. What do you think the impact of 3D Printing will be on our hobby? Part of me fears that as 3D printers become increasingly affordable there will be a whole lot of pirating of figures going on. However, for companies who get on the cutting edge of the technology and adjust their business models, I forsee great opportunities. I would not be surprised if within ten years I might be able to check out a range of figures online, download their specs as a file and print them out at home on my 3D Printer. Wouldn't that be interesting?

Probably lot more I could ramble about, but feeling tired and crappy. Goodnight.
Posted by Dux Homunculorum at 3:42 AM