The Hard Men of Post-Roman Britain

I've finished my Nobles for Dux Britanniarum, which means I've completed the basic starter army for a campaign. Here is the army of Cynwidion in all its glory.

One of the things I like about Dux Britanniarum is the emphasis on giving your leading characters some characteristics and back story that might not always influence the game (although it certainly does sometimes!), but helps you care more than usual about your little chaps on the table. The rulebook contains a number of tables to use while creating your characters, and there is a name generator on the Too Fat Lardies site, so I'm going to roll dice as I write this post and find out who I have painted. I promise not to cheat if I roll a negative result.

First up we have the Lord, Decurion Conomor ap Bledric of Cynwidion. He is 23 years old, of average build, and is known as 'The Quiet'. He has an Iron Liver (yes!) allowing him to ignore the negative effects of overuse of mead prior to battle. Less happily, he is an Exile, his father having been a noble in a kingdom that no longer exists. As a result he will suffer a -2 modifier when I roll for his wealth. Disastrously, I rolled a 2 for his wealth, so Conomor begins the campaign with only a Beggar's Bowl in wealth. 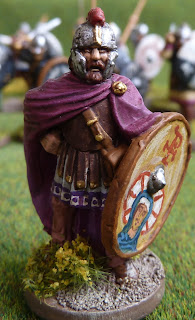 Conomor's Champion is Gwerthefyr. He is 24 years old, of average build and enjoys trips to the cinema (OK, I made that up). He is Lustful (coveting the women of others), so will suffer -1 on any loyalty roll (although I'm not sure if that has any effect on a Champion). 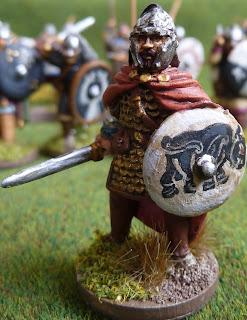 Two Nobles attend Conomor. The first is named Gwallawc ap Brydw. He is 33 years old, Tall and Strong, and is known as 'The Devil' (which can't be good). He also is Lustful, and is the Son of a Warlord previously allied to Rome. 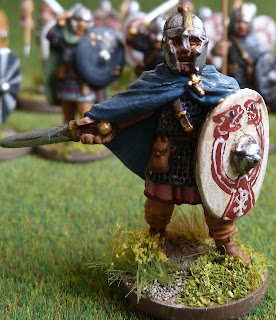 By a strange coincidence, I rolled the same patronymic for the second Noble, so his name is Gwalchafed ap Brydw, and therefore I surmise that he and Gwallawc are brothers. He is 28 years old, of Average Build, and is clearly a pious man, already having earned the soubriquet 'The Confessor'. Fittingly, he is Honourable, incapable of commiting regicide and gaining +2 on any loyalty roll. As for his background I rolled that he was the son of a Decurion, but since it makes no difference to the game I will treat him as also the son of a Warlord, like his brother Gwallawc. 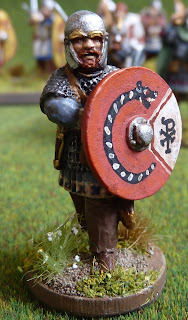 These are the men who hold the fate of Cynwidion in their hands. From their un-Romanised names I think they have come to Cynwidion from further North, and the king of Cynwidion (who is 64 years old, past his prime) has entrusted them with his kngdom's defence thanks to their reputation as great war leaders. They find themselves The King of Cynwidion is 64 years old. Along with Conomor's elite Blackshield hearthguard they command a disparate army of still largely Romanised troops from the militia of Verulamium and some surviving units who maintain the traditions of the Roman Comitatenses. The three nobles form a surprising alliance - Conomor prone to brood over the ruin of his family's position and Gwalchafed the opposite in temperament to his older, handsome but wicked brother.

Can these men hold the Saxon darkness at bay? Can they preserve the light of true religion and civilisation against the pagan hordes? Come, Sea Wolves, and feel the strength of British steel!

Posted by Dux Homunculorum at 9:15 PM