Here are the results of an experiment I'm pretty pleased with.

One of the advantages of buying plastic 15mm figures is that they are easy and cheap to convert, and I have no qualms about chopping them up. I decided I wanted a bunch of Soviet infantry in foxholes, this being Kursk after all, so I took a number of Plastic Soldier Company figures, cut them off at the waist, and added them to rough fox holes made from Miliput. I'm very pleased with the results, so long as you don't look too closely.

So here they are - a platoon of Soviet riflemen for Battle Group Kursk, in foxholes.

One thing I did learn from doing this is that I shouldn't have left any figures with weapons overhanging the edges of the base. Although it looks good, they are very prone to damage. Also, in the unforgiving close-ups, I realised that I should probably let the varnish dry thoroughly before dunking the base in sand. In my excitement I rushed them a bit! I do like the base with the two soldiers running for cover though. 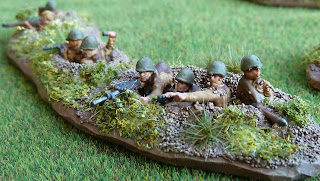 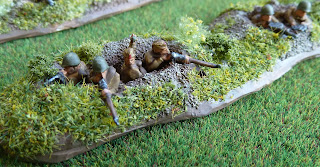 Posted by Dux Homunculorum at 1:14 AM