After some feedback from the SAGA forum and a bit more thought I've tweaked the Late Roman battleboard that I was playing around with last year. Thanks again to Damian for altering the file. 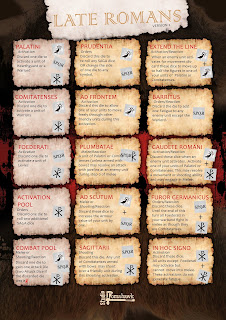 The main changes are that the Plumbatae ability can now be used in any melee, using the new concept of a Step 0 during melee from Raven's Shadow. It is also a bit cheaper. Barritus is a bit more expensive, and the ability previously known as 'Switch!' has the much more respectable name 'Ad Frontem.'