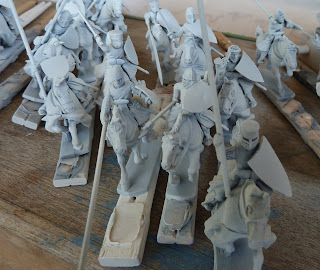 Just after Christmas the Duchess and I took our retinue away to stay with her parents for a week. Fearing hobby withdrawal I took away a box each of Fireforge's Templar Knights, Teutonic Knights and Mounted Sergeants to assemble. I'm intending to use them as a Holy Roman Imperial army from the 13th Century, probably led by Frederick II, so I was happy to mix and match components from all three boxes together.

I know some people are interested in seeing these figures assembled, so here are some images of what I put together. To start with, what's the difference between the three boxes? Basically, all three contain the same core components (torsos, weapons, arms). The horse differ, with the Teutonics having all the horses with caparisons, the Sergeants having none, and the Templars having half of each. The shields are different in the three boxes, as are the heads, with the Teutonics having mainly crested barrel helms, the Templars containing a nice range of transitional helmets and the Sergeants having kettle hats and so on. Crested helms were certainly not peculiar to the Teutonic order, so I will be using them alongside other helmets for my Imperial knights. 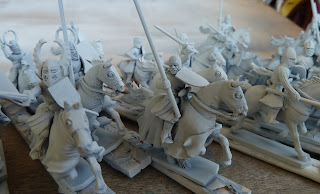 There is lots to like about these figures. They assembly very easily, with no gaps and almost no flash of any kind. The components between the three boxes are all completely interchangeable, so this is a great way to get a large and diverse force of 13th century knights. Some torso and arm combinations allow figures to be defending against an attack to their right, which is a rare thing from figure manufacturers, and looks great. In short, these are nice figures, and check out Ubique Matt's blog for an example of how amazing they can look when painted. 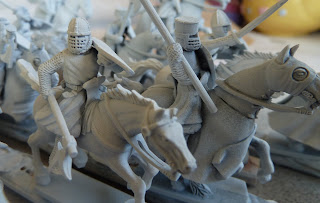 Things not to like? Well, the weapons, frankly. The swords are great, but the morning stars, maces and axes included in the sets are really a bit overscale, I think. A little bit '1240K'. The axe, for example, looks like a two-handed weapon, and I think would be exceptionally hard to use on horseback. The lances may be a bit too long, and you need to be careful to choose the right arms to carry them or they look very unwieldly. I went ahead and used all the the weapons from Fireforge, but those more motivated than I might seek alternatives. 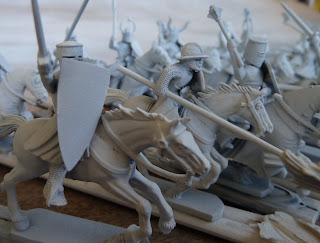 One final interesting point raised by Matt on his blog concerns the appearance of caparisons. Although Fireforge (along with just about everyone else) model the horses' tails sticking out of the caparisons, Matt suggests that medieval art seems to always show them covered by the caparisons. After flicking through a few images this looks to be right, which is a bit baffling. The caparisons must have got pretty filthy at the rear, shall we say. Fortunately I read this on Matt's blog after I had assembled the figures, thus avoiding the nagging feeling that I ought to research it properly and remove all the horses' tails. I'm looking forward to seeing these all painted en masse!
Posted by Dux Homunculorum at 8:41 PM